The Utility Division is responsible for the continuing operation of the water supply treatment distribution system, the sanitary and storm conveyance system, and the maintenance of all the ponds and lakes within the storm system.  Responsibilities include the continuing operation and preventative maintenance for water treatment and storage, sewer collection, water distribution, and storm conveyance systems.

In 2015, the Utility Division produced 2.85 billion gallons of safe and clean drinking water for the community and again received the highest rating from the State Department of Health.  Peak daily water consumption was 16.4 million gallons on August 5, 2015.

The City of Eagan is happy to report that its drinking water is safe. As required by the United States Congress and the Environmental Protection Agency (EPA), Eagan, like all community systems, annually prepares a report on the quality of the drinking water provided.

At the City of Eagan, our goal is to provide residents with high-quality, safe, reliable drinking water that meets every federal and state water quality requirement.

This report contains information about the water source, treatment, consumer demand, contaminants detected and other information of interest. The City of Eagan is issuing the results of monitoring done on its drinking water for the period from January 1 to December 31, by the Minnesota Department of Health and the City’s own laboratories. The report also answer common questions people have about the City’s water. This report is meant to advance public’s understanding of drinking water and heighten awareness of the need to protect precious water resources.

In an effort to Go Green, Eagan is now posting the Drinking Water Quality Report (CCR) on the web in lieu of sending the report by mail.  The City of Eagan meets all standards for drinking water quality.  Read the full water quality report. Current year reports are available July 1st.  Paper copies are only available upon request at (651) 675-5200.

The North Water Treatment Facility was placed into operation in 1985. The plant removes the iron and manganese from the raw water, which can cause discoloration and staining of plumbing fixtures and the creation of rust in the system. Raw water for the plant is supplied from the north well field.

In 2002, the plans and specifications for a new upgrade for the North Treatment Plant were started. Construction began in July of 2003 and was completed in April of 2005. The expansion added an extra 10 MGD (million gallons per day), improved the chemical feed systems and sludge handling operations, allows the utility to produce 22 MGD and house the City's Utilities Department.

In 1992, at the South Water Treatment Facility was placed into operation. Included in the construction was a SCADA (Supervisory Control And Data Acquisition) which provides centralized control, security and monitoring for both treatment facilities and both well fields. This software also allows for generation of reports for operation and trending to better manage peak demand periods.

Eagan's water distribution system consists of 373.5 miles of water main with sizes ranging from 6" to 30" mains.

Water within the system is stored in 6 reservoirs and towers throughout the community. The Utility Division maintains a storage capacity of approximately 18.5 million gallons of water.

The Utility Division along with support from Barr Engineering have completed the State of Minnesota Health Department mandated Wellhead Protection Plan. This Wellhead Protection Plan refines aquifer layers within the boundaries of the City of Eagan and establishes protection for the wells that supply the drinking water.  Read more on how everyone benefits from a wellhead protection plan.

There are approximately 4,201 hydrants on the City of Eagan water system.  Flushing 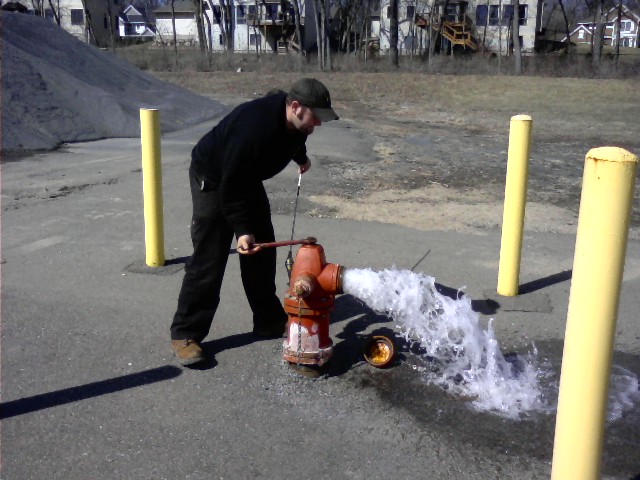 hydrants are an important preventative maintenance activity.  Hydrant flushing is typically done from mid-April through August.  This process is part of a routine maintenance program necessary to maintain the integrity of the water system and to continue to deliver the highest quality water possible to our residents/businesses. Flushing the water system on a yearly basis allows the Utility to find hydrants that may have been damaged during snow plow operation and keeps the entire distribution system refreshed. Although temporary discoloration may occur along with air pockets, this discoloration consists primarily of harmless rust that may have accumulated in the lines and will not affect the safety of the water. If you do experience discoloration or air pockets in your water after crews have been flushing, clear the pipes in your home by running an unfiltered faucet until it clears up.

The City of Eagan has 302 miles of clay, concrete, plastic and ductile iron sanitary sewer mains ranging in size from 8 to 30 inches in diameter, 8025 manholes, 14 lift stations with 4.32 miles of force main, and almost 20,000 service connections to sanitary sewer system. The City is responsible for the sewer mains, manholes, and lift stations. The Customer is responsible for any maintenance or repairs on the service line from the home to, and including, the connection at the sewer main line.

The Utilities Division of Public Works has a defined maintenance program. The program is intended to avoid or minimize problems in the sanitary sewer system to the maximum extent possible.

In 2002, the Utility Department started a program to line selective segments of the Sanitary Sewer Collection system. The intent is to line between 5,000 and 7,500 feet per year. Through routine closed circuit television reports, we determine the lines that need repair. The cost of relining is generally far cheaper than open cut replacement because there are generally no restoration costs. The lines are repaired using the cured-in-place hot water immersion method where a resin impregnated felt sock is inverted in the existing pipe, cured in place, and then the services are re-opened using a camera and remote cutting tools, with little or no disruption to sewer service. The process restores the pipe to its original integrity and also seals out infiltration and root growth. To date, we have lined 69,570 feet and there is an estimated 109,216 feet that presently needs repair.

The Sewer Section began contractually televising sewer lines in 1982, to inspect the lines by inserting a camera into the interior of the pipe. In 2000, the Utility Department purchased its own mainline television system. The purchase of this camera not only alleviated the need for rising costs of contractually televising sewer lines, but also added the ability for the Utility Department to televise more lines per year and to do emergency inspections when required. Televising allows the operator to inspect the services as it also inspects the lines. Services found to have high root concentrations are identified and the resident for that service is notified and assisted in alleviating the problem. This television report allows utilities to visually inspect the pipe for cracks and root intrusion and verifies the location and condition of the connection of individual house sewer services.

Television inspection is also employed in major street reconstruction or development projects that encroach onto existing utilities. These televised reports allow repair of problems before major reconstruction and documents pipe condition before contractors begin their work. A follow-up inspection is done to verify that no damage was done to existing utilities. In 1995 the Department purchased a service line camera. This is used to televise all house service line blockages at completion of reconstruction to identify problems and determine who is responsible for repair.

The Utility cleans approximately one third of the sanitary sewer main annually to remove grease, sludge, sand, and debris. The preventive maintenance activity helps keep the sanitary collection system clean and flowing properly. Cleaning begins in the spring (March/April) and continues into the fall (October/November).

The sanitary sewer lines are cleaned using high performance sewer (jet) cleaning equipment. A cleaning nozzle is propelled from one manhole to the next using water under high pressure. The nozzle is then pulled back to the starting manhole. As the nozzle is pulled back, water scours the inside of the sanitary sewer pipe. Any debris in the pipe is pulled back with the water. The debris is removed from the manhole with a vacuum unit. If roots are found, they are cut with a root cutter. This process is repeated on every sewer line cleaned. Jetting is performed at a minimum once every six years.  City sewer mains requiring a higher level of maintenance are cleaned more frequently. The sanitary lift stations are continuously monitored and physically checked weekly.

Keep Your Toilet Bowl Lid Down

The sanitary sewer jet-cleaning machine uses high-pressure water to clean the sanitary sewer. This high water pressure may affect your home's sanitary sewer plumbing. You may experience gurgling or bubbling water in the toilet bowl or, in rare cases, splash out of the bowl. The water that could come from this type of incident is from the bowl itself. The common causes of air venting into homes during sanitary sewer cleaning are: air movement from normal cleaning operations, the use of higher pressure needed when cleaning sanitary sewer lines that have a steep slope, sewer lines running close to the building, a plugged roof vent, and the size and complexity of the home’s wastewater ventilation system. So, to minimize water splashing out of your toilet bowl, make it a habit to keep the lid down. You may smell sewer gas from your basement floor drains and other fixtures. If this does occur, flush your toilet and pour water into your floor drains and sinks. Sanitary sewer cleaning does not damage your sewer system. The water that comes out is the water that is normally in the home's system (drain traps), not the water from the sanitary sewer in the street.

What Homeowners Can Do To Help?

The sanitary sewer system begins with the plumbing fixtures inside the house. All of the drains from the sinks, tubs, showers and toilets are piped to the sewer service that exits the house and connects to the sewer main under the street. Each drain has a ‘trap’ and a vent pipe that prevent sewer gases and odors from entering the house.

Some basic trouble-shooting might help you when a drain backs up. If only one section of plumbing or fixture doesn’t drain, it is usually a problem within the house. However, if no drains work, or the entire system drains slowly, or the worst case scenario occurs – waste water comes back up through the basement floor drain, the problem is probably outside of the house in the sewer service or the sewer main. Please notify the City if a sewer cleaning service is cleaning your private sewer line so the City can make certain nothing plugs the main sewer line.

You can reduce potential problems by following some simple rules:

If it is determined that no blockage or restrictions exist in the City's sanitary sewer system, the property owner is advised to contact a professional plumber or drain cleaning service to have the private sewer service inspected. The City cannot make a recommendation for drain cleaning services. A property owner may wish to obtain several estimates. We do however request that you notify us after a sewer service has been cleaned. Typically, the cleaning process pushes a significant amount of solids into the sewer main and could cause a blockage in the main, which could lead to an even bigger problem.

The City’s storm sewer system consists of 315+ miles of pipe. Storm pipes are constructed of concrete, plastic, and ductile iron pipe, with sizes ranging from 12" to 90". The storm system also incorporates 21 lift stations with approximately 6.6 miles of force main into the system. 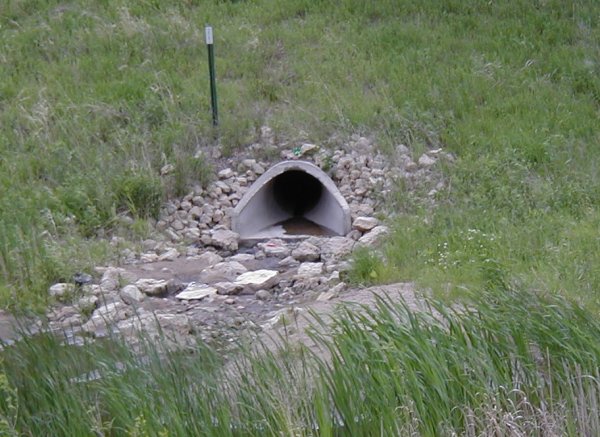 The infrastructure system of pipes and drains is interwoven within Eagan's many ponding areas. Utility maintenance personnel maintain the inlets and outlets for these ponds along with the removal of erosion siltation which occurs in the ponds. There are 142 internal system control structures used in controlling elevation of the water in these ponds. These are checked and cleaned after each significant rain event. An ongoing maintenance project is removing debris and sedimentation from storm ponding areas.

If you have any questions, please feel free to contact the City of Eagan Public Works Utility Division at (651) 675-5200.